It is in the quiet, 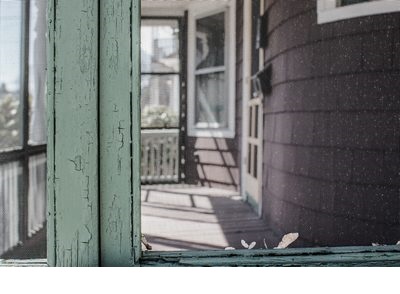 in the echoes of five rambunctious kids
pounding pall mall in and out of doors,
up and down steps, slamming the storm door,
Mom, I’m gone!

But now it’s mom is gone and dad is gone
and the porch, home to loud cribbage games,
louder family ‘talks’ and louder yet thunderstorms
sits soulfully silent, the spare key no longer
hidden in the super secret spot of the rusty metal box
on the windowsill. The trick-or-treaters no longer
come squealing up the walk, the chaise lounge
no longer protests under her weight and nor do they
under her eye. Buyers today see only chipping paint,
the splintering wood and the loose screens,
the things that need fixing and not the things fixed.
They don’t hear the wind chimes or the whispers,
the laughter, the tears or the life—that life.
But listen to this quiet and you can hear it,
I remember, and until there is no one left that does,
You are not gone.

This post is being made simultaneously with a photo essay of the house at the center of this poem, Dick’s not there anymore and posted on the Book of Bokeh.

Dick Brodeur was a wonderful man and we were lucky enough to have him as a friend and next door neighbor from the very first day our family moved to Putnam. What’s more, we were able to meet all of his children (and grandchildren!) and have become especially close with his youngest daughter, Michelle (now Foronda) and her beautiful family as well.

Sadly, last year, Dick—who was well into his eighties, but still boisterous and funny until the end—passed on and was finally reunited with his dear wife, who had passed on before him and whom he missed very much.

On Easter Sunday I was leaving my house and walking by his when I realized that for the last years of his life, even though Dick had slowed down and was not so mobile as he once was, the house had always had a lived in vibe to it, but that now that he was gone, I could sense the quiet and stillness radiating from it, the silent loneliness of a house that had raised a passel of kids as rambunctious as they come, but that now had no more noise to make. I ended up shooting a photo essay of the house trying to capture that feeling and afterwards, in asking Michelle’s permission to post it, she responded not only with a yes but some deep and fond memories of growing up there. Those memories (I merely knocked them into shape) are the heart of this poem.

Thank you for reading It is in the quiet,. I sincerely hope you have enjoyed it and I humbly appreciate your visiting the Book of Pain. As always, I look forward to your comments.

Poem © 2014 by Michelle Foronda and John Etheridge; photograph and notes © 2014 by John Etheridge; all rights reserved. The poem and accompanying notes are licensed under the Creative Commons Attribution-Noncommercial-No Derivative Works 3.0 Unported License. This applies to all original written work found on this site, unless noted otherwise. The attribution claimed under the license is: © 2014 by Michelle Foronda and John Etheridge, https://bookofpain.wordpress.com. The photograph is not licensed for use or reproduction in any way, unless so granted in writing by the copyright owner.